A trip round the team with a few notes about some of the special defensive aspects of each position... 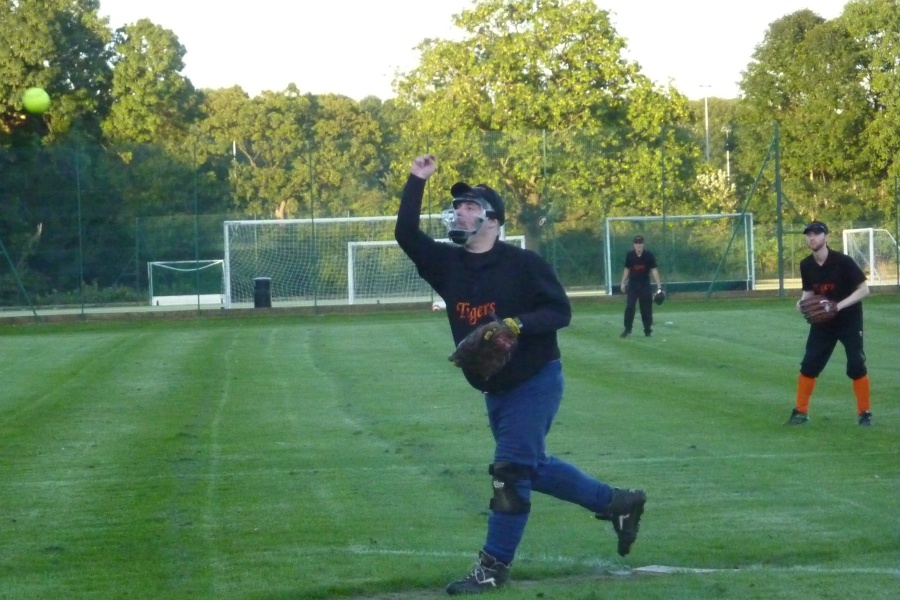 The pitcher can also help the whole team defensively by working quickly and throwing strikes, a fast paced game keeps the fielders on their toes and mentally alert. 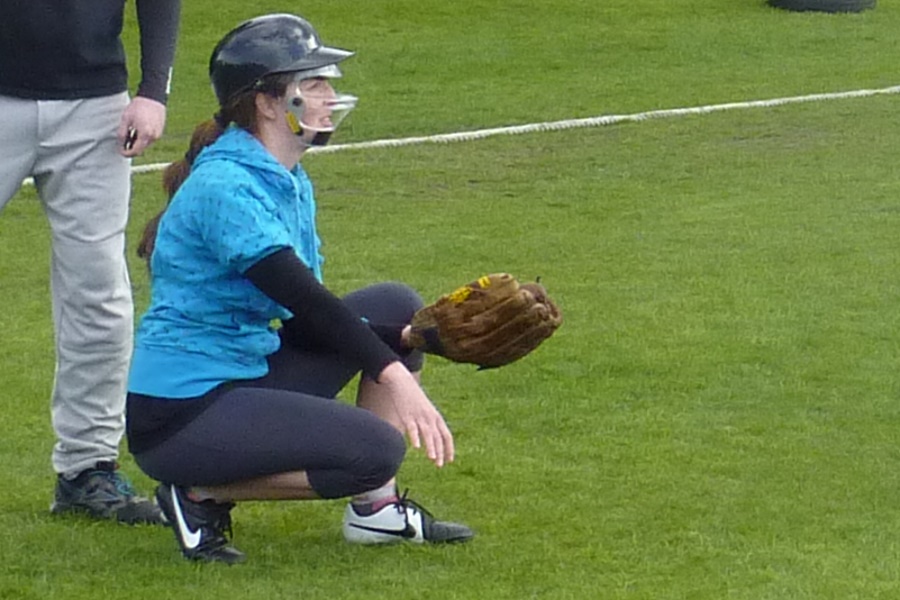 A common play is when the play is on first but there is a runner on third who will look to come home on a ground ball to the infield. The catcher should be ready for the throw home from first after the out at first on an infield hit. Just catching pitches cleanly and returning the ball efficiently to the pitcher will help the pace of the game and help the pitcher maintain a good rhythm.

Most catchers squat, but they do still need to be ready to field the ball, getting out into the diamond to scoop up mis-hits or moving sideways or backwards to catch pop ups.

Inexperienced catchers often stay behind home plate passively looking on. The player must learn to get out in front of the plate whenever there are base runners in motion. The catcher must make sure they set up sufficiently far in front of the plate that they can tag an oncoming runner before that runner is able to touch home plate. 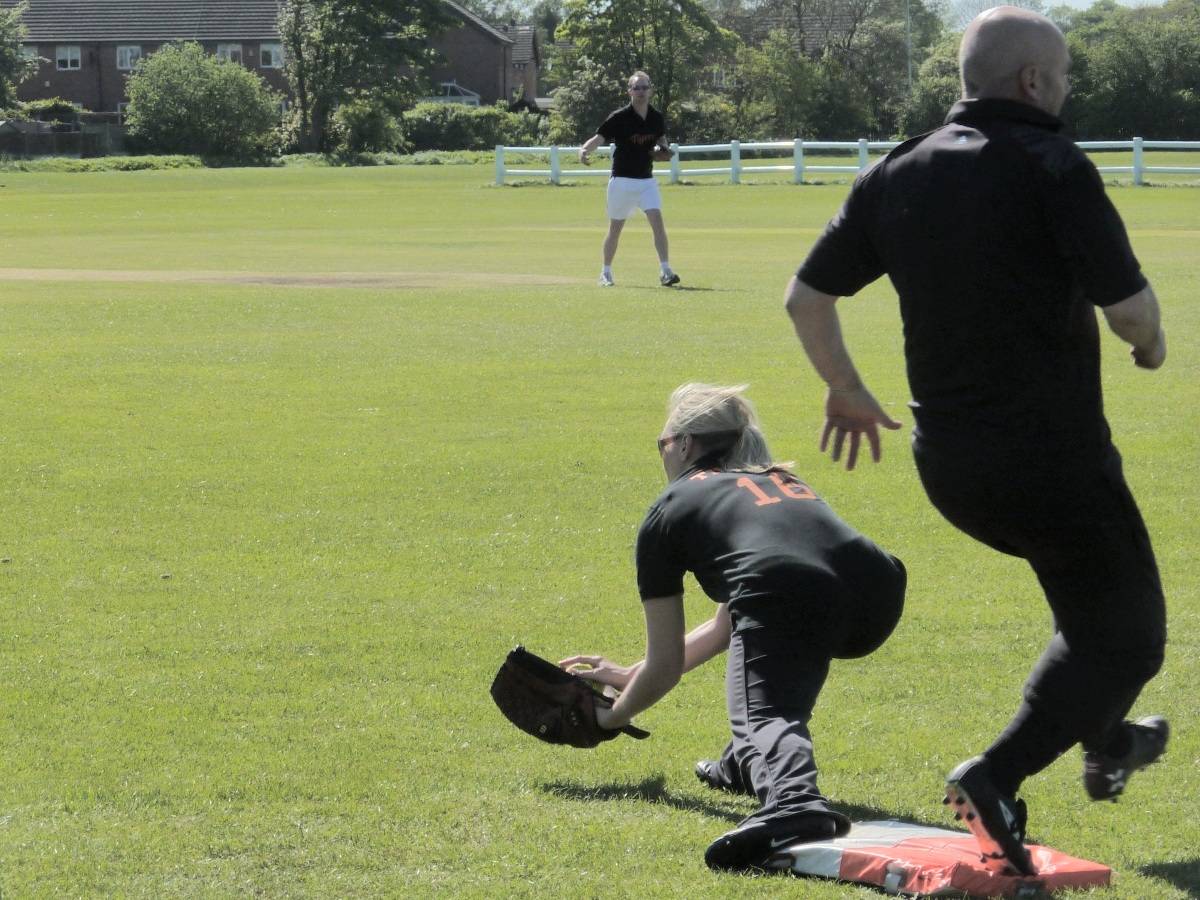 First base needs to field the ball when it is hit towards them but the biggest part of their job is catching throws from other infielders to get the force outs at first. The fielder must realise that catching the ball is more important than staying on the bag. If pulled off the base towards home the baseman can often still get the out on a wild throw by tagging the base runner. That said staying on the base IS important. The baseman should set up with their throwing side foot on the base so they can stride out to meet the ball and catch it as quickly as possible. A common mistake is to take the step before the thrower releases the ball. Hold back until the ball is released so you can move towards where the ball is actually going rather than heading for where you wanted it to be.

When the ball is hit onto the outfield and there is no play on first the first base should move into the diamond, watch the batter to make sure they do touch first on their way past, and be ready to back up play on the other bases. When the play is on first but there are other base runners first base must anticipate the need to throw to home or third to prevent the runner(s) advancing after the out is made at first.

Second base and shortstop 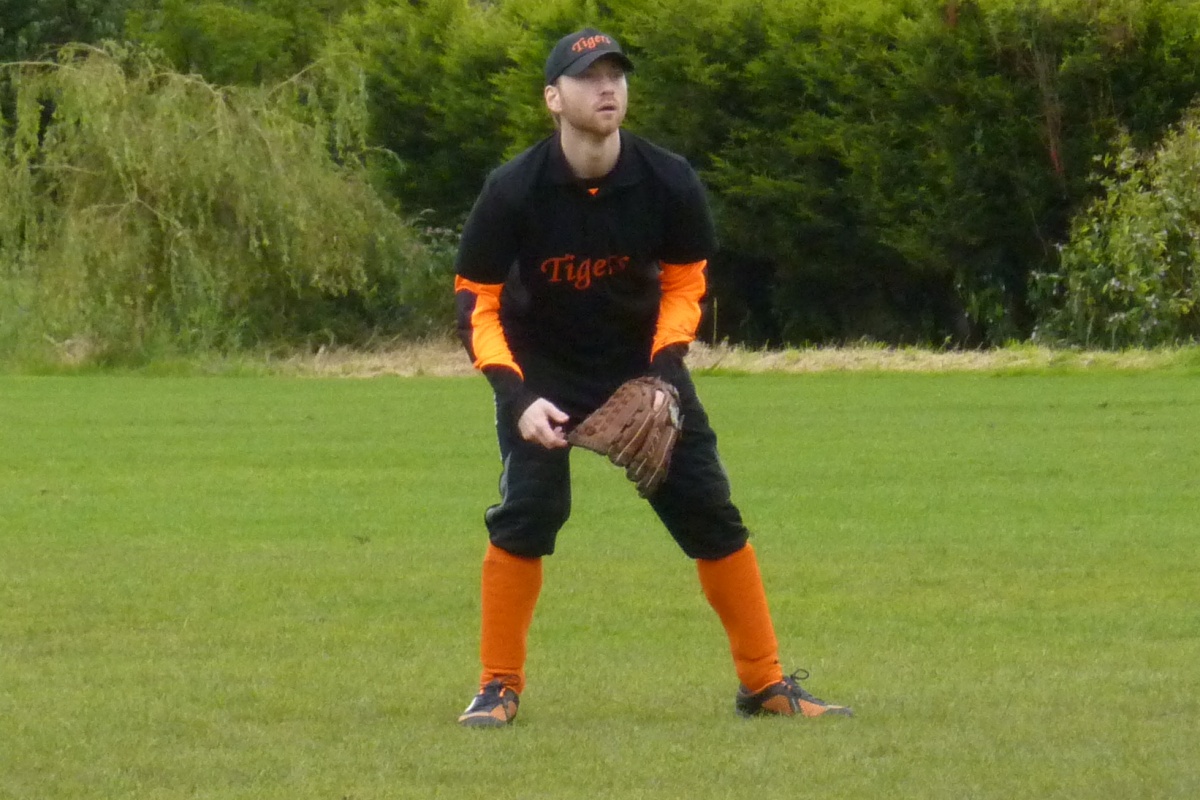 The short stop and second base player should ideally be agile and quick off the mark as they need to react to a wide variety of ground and fly balls. The speed of their reactions and of the first step they take is more important than their speed over longer distance. These middle infielders are further away from the batter than the corner fielders and therefore can afford to adopt a slightly more upright ready position. 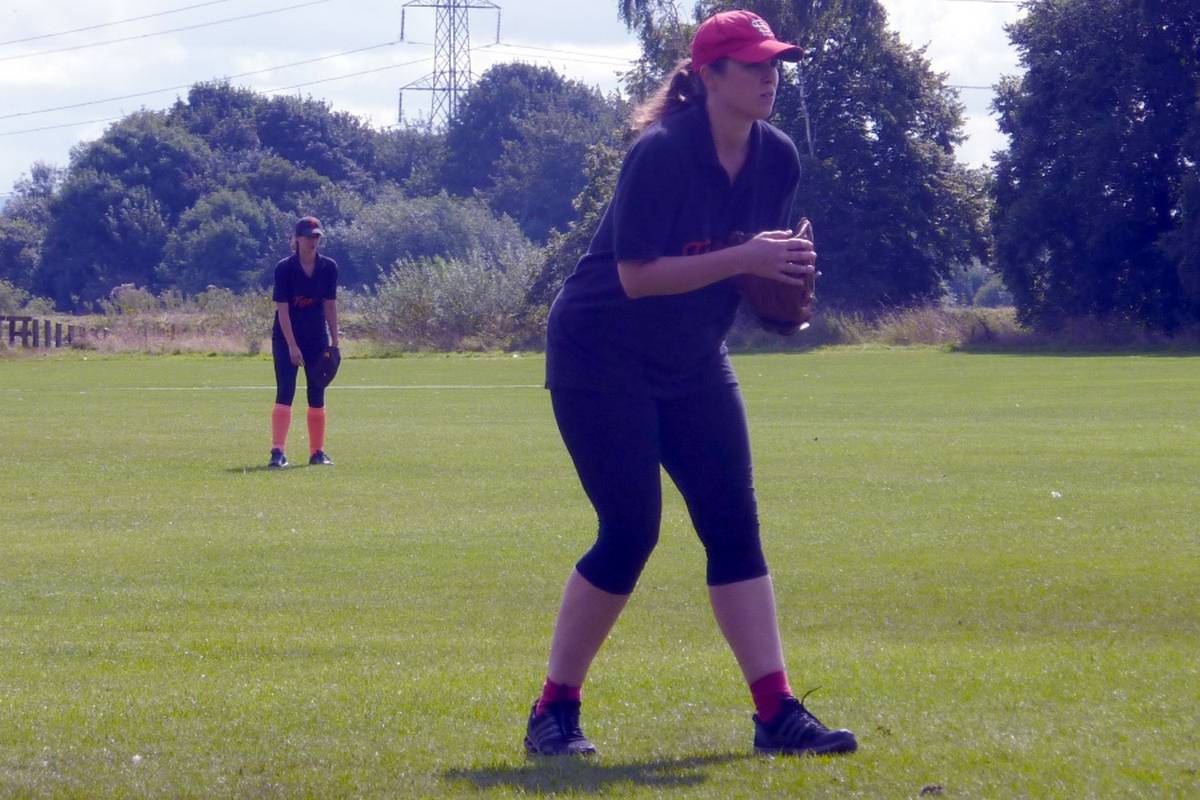 Right handed batters tend to hit the ball hard through 'hot corner' so the fielder should have quick reactions. The longest throw in the infield is from third to first so a strong arm is an asset. If the third baseman does have a good arm then with runners on first and second and less than two outs the 'third then first' double play can be easier than 'third then second' as the third baseman doesn't have to spin round as far to throw to first and the batter is usually slower to set off running than the runner on first. When a weaker batter comes to the plate the third baseman should field inside the diamond. This can intimidate a nervous batter and it also makes fielding weak infield hits a lot easier. 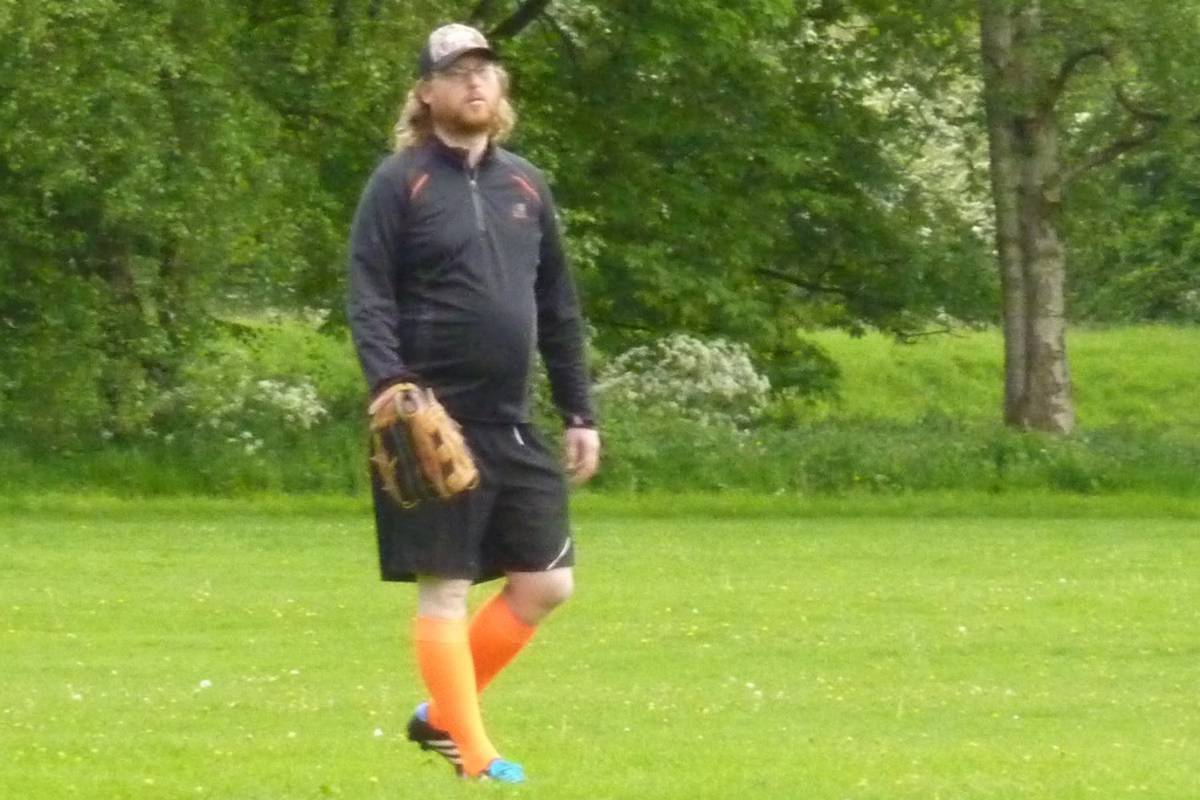 Outfielders should play deeper with runners on base than when the bases are empty. With empty bases look for the catch, with base runners look to keep the runners from scoring.
Outfielders should back each other up and call loud and early when they intend to field the ball. It is easier to judge the flight of the ball when off to one side so the outfielders on either side of the fielder to whom the ball has been hit can tell them whether to move in or out to field the ball.
When the ball is hit to the opposite side of the diamond or within the infield the outfielders should move in towards the infield so they are in a position to retrieve any wild throws.

When returning a fielded ball the outfielder should always throw the ball to a team mate, not just lob the ball back in the general direction of the diamond.
In pro-ball the best corner outfielders play in right field because the throws to third and home are longer than from left field but in softball the strongest outfielders have traditionally played in left field because the ball is hit there more often than to right. More recently a lot of the better teams have been putting a lot of emphasis on hitting to right field so just like in baseball it can be worth putting an outfielder with a strong arm on that side.

All outfielders need to work hard to back up the other outfielders on either side of them, move to back them up before the ball has reached the neighbouring player, if you wait to see if they field the ball successfully it will be too late to do anything about it if they do not. Outfielders must also remember that they still have a role to play when the ball is hit to the opposite side of the field or is live within the infield. Just as they must back up other fielders in the outfield they should seek to anticipate any possible mis-play within the diamond and be ready to tidy up any loose throws or chase down any ball that gets away from the infielders. 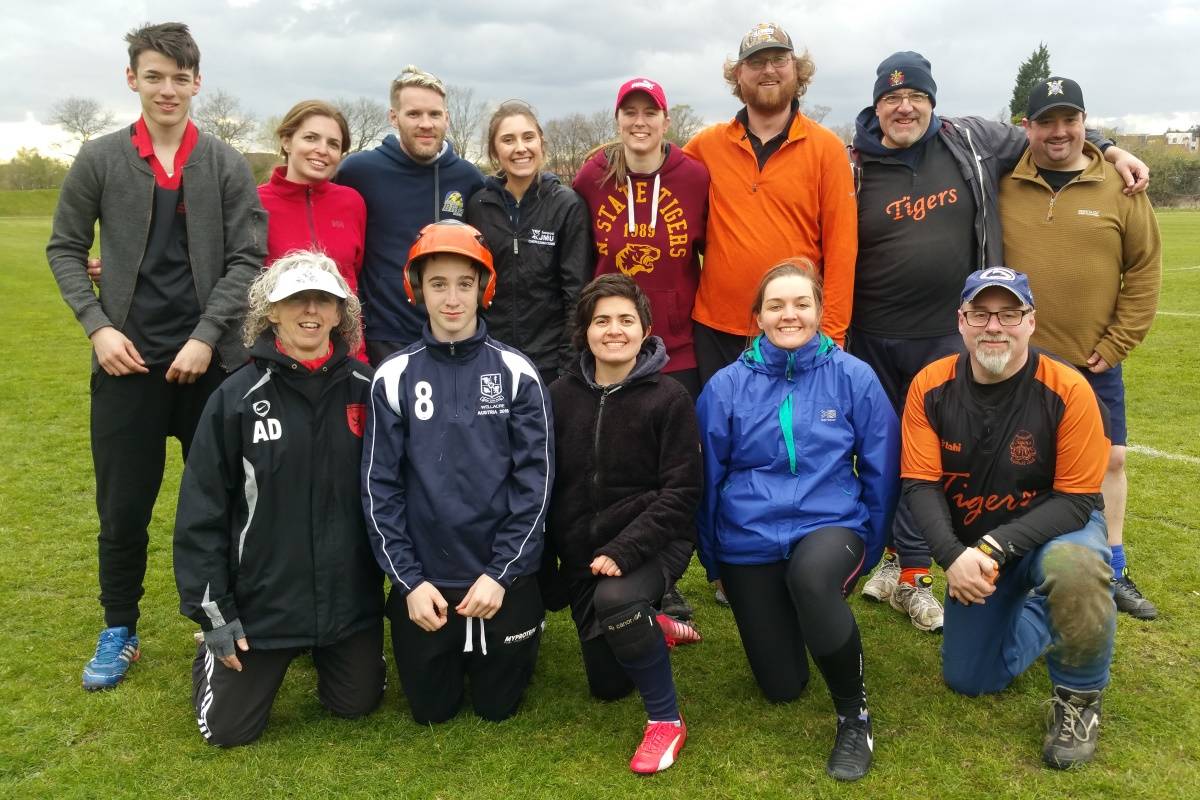