Before each play a fielder (usually the shortstop) will call out the number of outs and which base play is on. Before the pitch is thrown each fielder should use this information by thinking

What play do I make if the ball comes to me ?

What play do I make if the ball goes to someone else ?

Fielders should ask themselves both these questions before the ball is pitched, and not just ask the questions but also know the answers. At it's most basic the player fielding the ball will gather it in and make a throw, an infielder may alternatively step on the nearest base whilst holding the ball if there is a force play on that base. Whilst that is happening the other fielders will also be in motion, other infielders will normally cover their base, othere outfielders will back up the play.

As the pitcher prepares to pitch the fielders should get into position to field the ball if it comes to them, the 'ready position'. 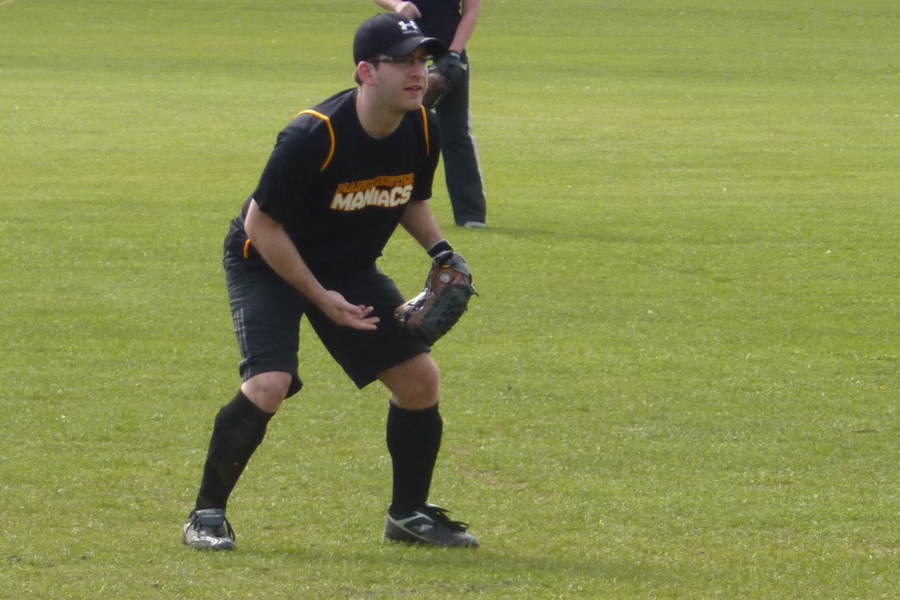 Infielders set up in a crouched position with their hands in front of their body, looking at the batter as they hit the ball and with their feet slightly more than shoulder width apart. They should stand with their weight on the balls of their feet, not back on their heels, and have their knees slightly bent, ready to move in any direction as required. The middle infielders (second base and short stop) are further away from the batter than the corner fielders. This extra distance gives them longer to react to the hit which in turn means they can set up in a slightly higher stance than the two corner infielders.

The pitcher should also get into a ready position after releasing the pitch. 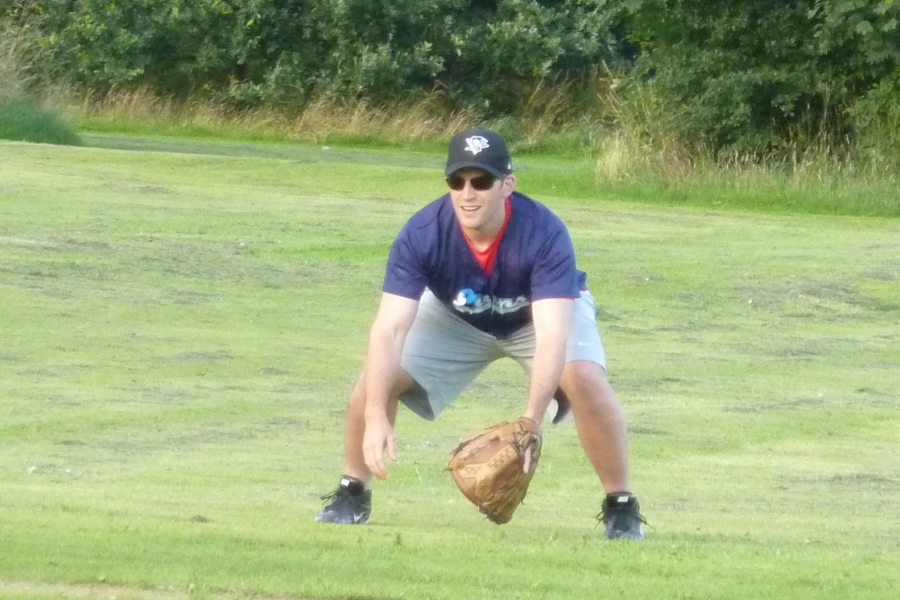 Outfielders have more time to react to the ball after it is hit so the outfield ready position is more upright. Again the feet are slightly over shoulder width apart and the hands in front of the body. Again all fielders should be watching the batter as the pitch comes in so that they can 'read' the hit as it comes off the bat. 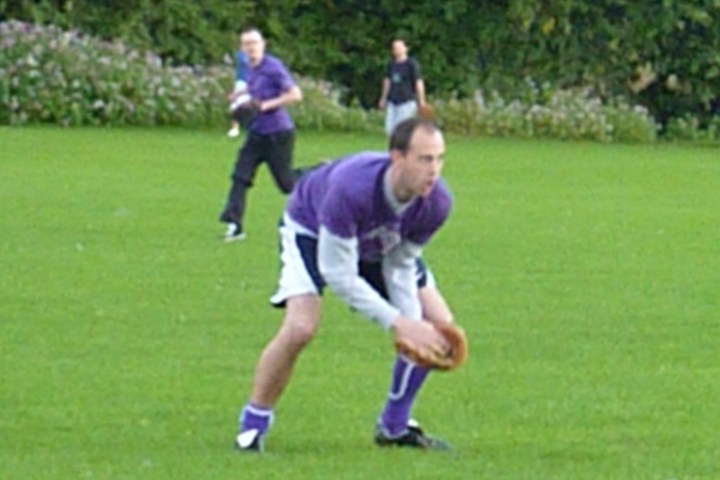 Field the ball well in front to keep the ball in sight. Catch the ball at head height or just above with the ball in front of the middle of the body or slightly to the throwing hand side. Keep your elbows slightly bent and arms relaxed so that you can adjust easily to a moving ball. The bare hand should be just behind the glove as the ball is caught to trap the ball and to allow a quick throw.

As you get more confident practice setting up slightly back from where you expect the ball to land so you can move in to catch it and use that momentum to give you more power on your throw after taking the catch,

KEEP YOUR EYES ON THE BALL ! 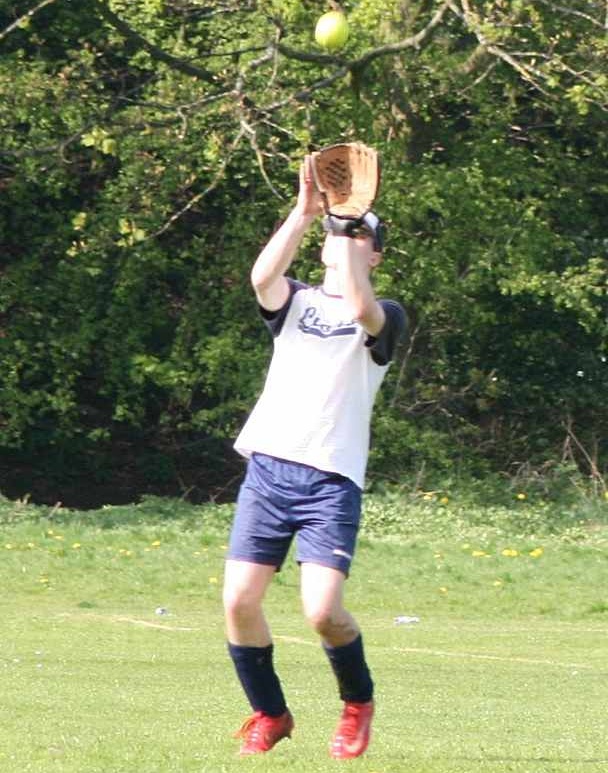 When throwing the ball it's important to get some forward momentum by stepping forward as you throw. Make sure that you use the whole of your body to help propel the ball forward, the more power you can get from your legs and waist the less strain you put on your arm

Fielders in motion: Backing up

Backing up in the field is universally agreed to be a Good Thing but what does it mean in practice ? At it's most general it means that all fielders should be alert to the fact that other fielders make mistakes and be ready to deal with the results of other fielders mishaps.

It's a baseball cliche that there's no play called standing around. Every fielder should be active when the ball is in play, fielding the ball, covering a base, preparing to receive a throw, or backing up another player who is fielding or receiving the ball. In the photograph below third base has missed the ball, but the damage will be limited because both the short stop and the outfielder behind are pushing across at speed to cover the miss. 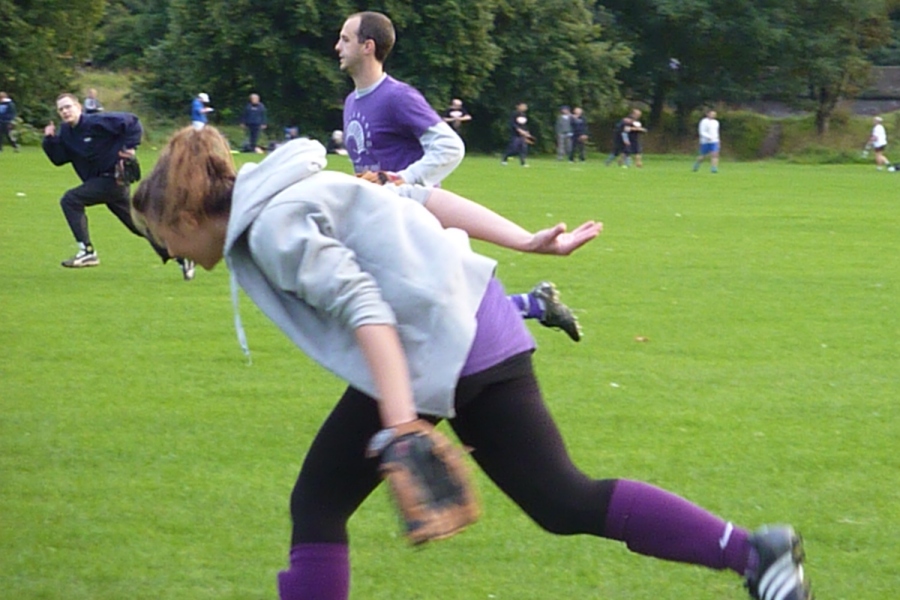 Each position in the field has it's own characteristics and the fielder should be aware of their special responsibilities, click on a position to read a bit more: