All games at Parrs Wood

The Tigers recovered from a shaky start to chalk up an ultimately comfortable win against a gallant Rippers side. Ed (5 for 5) and Rich (4 for 4) each batted 1000. TK was the female OBP leader going 3 for 5 (600). Ed was this week's Home Run Hero with a four bagger to cap off our 9 run 3rd inning.

In the field Ed played well at short stop with the highlight a well executed single handed double play, tagging the runner between 2nd and 3rd and then treading on 2nd to get the runner from 1st.. Holly had another good game at 2nd , Aly made some nice catches in left field whilst James and Richard worked well together in left and right centre.

The Tigers on field action was overshadowed this week by the match day news that Steve had broken his arm and will be out of action for 6-8 weeks. The gap in the on field line up was filled by experienced guest Jeremy Fothergill who hit our only Home Run of the evening and also swiped the male MVP award. Male OBP leaders were Ed and Jeremy who each went 5 for 5 (1000). Female leader was Alyssa who went 4 for 5 (800).

In the field both Rob and Glen made some nice plays at 3rd, Jeremy pitched a strong game recording a number of strike outs, Holly made short work of any and all pop ups at catcher and Ed made a fine fielding play in the 7th to rob Mario Rueda of a possible 3rd Home Run.

The Tigers juggernaut rolled onwards with another mercy win. Several people were perfect at the plate, Ed and Rich each went 4 for 4, with Sandra, Holly and Rob all 3 for 3. Our only Home Run came from Rich when he led off in the top of the 1st but a lack of homers didn't mean a lack of runs.

In the field Ed and Holly worked their magic at SS and 2nd. Steve pitched well. Glen did a good job at 3rd and TK and Sandra were solid at first and catcher respectively. In the outfield the highlight play was a nice catch by Aly whilst James worked perhaps too hard, tweaking his hamstring towards the end of the game.

After being 3-2 down after the first 2 innings the Tigers roared into life with an 18 run 3rd inning that killed the game as a contest. An 8 run 4th nailed down the coffin lid. There were strong batting performances all the way up and down the line up. Male OBP leader was Rich who batted 1000, going 5 for 5, closely followed by Glen who went 5 for 6. Female leaders Emma, TK and Holly shared the honours all going 4 for 5 (800). Home Run Heroes were James and Ed with a pair each. Steve also claimed a four bagger. One of Ed's homers was a grand slam. Steve also took the opportunity to show off his sliding skills.

In the infield Ed put in a fine performance at shortstop. Holly played well on 2nd, Steve pitched well, TK and Jackie put in solid performances and Glen took one for the team when he stopping a hard ground ball with his shin. In the outfield James put in an MVP performance, Aly was her normal excellent self, Richard and Emma were a very reliable right outfield with the highlight being Emma's ankle high running catch. 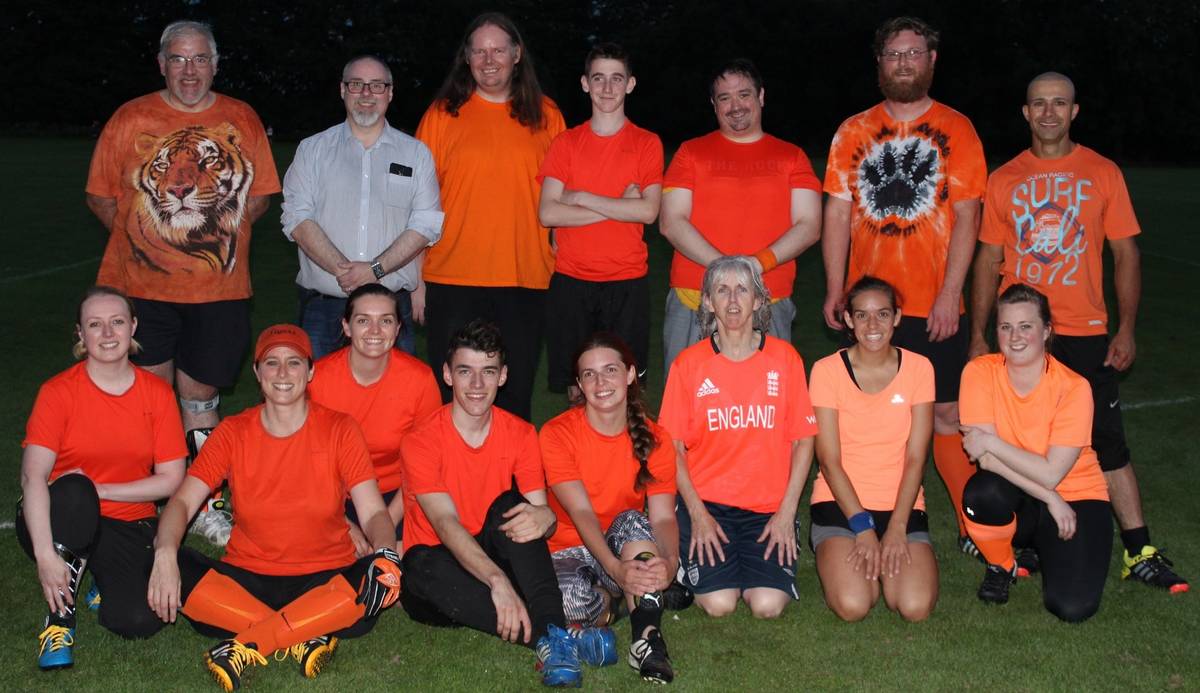